What is CFD?
CFD Trading
Investments in Shares: where to begin?
START CFD
TRADING
+ 30%
to every deposit
LEARN TO
TRADE CFD
Check
your strategy

The forex market is traditionally associated with trading foreign currencies that are quite volatile and imply making hefty profits. There are also some trading instruments which are not so volatile but still can generate decent profits. The advantage of these instruments is that they enable traders to create an efficient investment portfolio and work with a great variety of assets. It refers to trading contracts for difference (CFDs) on shares in the world’s leading companies.

CFD is a contract for difference in prices that is concluded between a buyer and a seller through the intermediary of a broker. Assets in the contracts for difference may be shares, bonds, gold, crude oil, silver, and copper, as well as major stock indices such as Dow Jones, DAX, NASDAQ, and S&P. The list also includes global currencies and over volatile assets. This financial instrument does not imply actual buying of an asset. It gives private investors an opportunity to earn on constantly fluctuating exchange rates. A trader buys a CFD on the chosen asset and sells it, profiting on the difference in prices.

CFDs on shares are contracts for difference where the underlying assets are shares in the world’s leading companies such as Apple, Amazon, Microsoft, Google and others. The shares are quoted on major exchanges and over-the-counter securities markets.

The basic idea of CFDs is rather simple – to make a profit, a trader needs to foresee whether the difference between the current price and the future price will be positive or negative.

How does it work?

Analysis of a chart showed that Boeing shares are likely to go up.

They open a buy deal.

They wait for a rise in the Boeing shares. 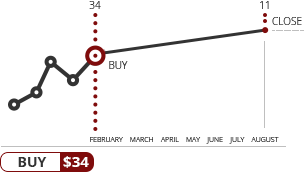 Methods of fundamental and technical analysis are equally effective for making forecasts. A large number of various instruments that can help a trader to foresee the price movement is available. Overall, trading CFDs is similar to trading on a stock exchange. The difference is that speculators work with lots and can place both long and short deals. They trade not the instruments but their prices.

Trading contracts for difference has a lot of advantages comparing to trading on a stock exchange. CFDs draw attention of both beginning traders and professionals. The last ones use CFDs as an alternative to a stock market. Let us see why traders prefer trading CFDs rather than underlying assets.

Low requirements for initial deposit. The minimum requirements for CFD trading are much lower than on the stock exchange.
An opportunity to use leverage. The leverage enables investors to trade bigger volumes with minimum investments.
Making profits on a falling market. In this case, investors can sell the CFD, i.e. open a short deal.
Trading live quotes. An investor can open a deal at the best price.
Availability. Trading contracts for difference is conducted on the same platforms as forex trading which is very convenient for traders.
There are no time limits. Trading CFDs on shares is not bound to the working hours of the London or New York stock exchanges.
A possibility of risk hedging. Placing one buy order and one sell order, investors can both ensure safety of their money and gains double profits.
Trading CFDs requires no tax payments. Traders do not have to pay special taxes or other fees that are usually charged on the stock exchanges.
A wide choice of trading instruments. Trading CFDs provides access to shares of the world’s leading companies.
No daily trading limits. Some markets impose capital restrictions on daily trading limits but CFDs do not have such limits.

For example, let us see how one can earn money on the difference in prices of the shares in Apple, the world’s biggest corporation. Thanks to the innovative technologies and exquisite design of its products, Apple has gained the perfect reputation and has the biggest market capitalization. Its shares appreciated steadily, adding more than 265% from 2014 to 2016. Since the beginning of 2017, shares in Apple rose by 48%. By September 5, 2017, the company’s market capitalization reached USD 850 billion according to Wikipedia.

Mr. Buffett made the first investment in the first quarter of 2016. His company - Berkshire Hathaway – bought a portfolio of shares amounting to 9.8 million. In the second quarter the investor purchased 5.42 million stocks at a price from USD 90 to USD 112. Though Buffet made billions of dollars by investing into the technology giant, he continued buying for a rise. By the end of 2016, Berkshire consolidated about 61.2 million shares with the average price of USD 106-118 per a share. In the first quarter of 2017, Buffett doubled his shares in Apple (they were purchased at a price of USD 116-122 per a share).

It is not difficult to calculate how much Buffett earned on this investment. Surely, one needs to have a hefty sum to buy shares in some company.

However, there is an easier way to invest in stocks – buy CFDs on shares. It is not necessary to purchase an asset; there is a speculative opportunity to reap profits from the difference in stock quotes.

Since the beginning of 2017, shares in the world’s leading producer of smartphones and tablets skyrocketed by 48% to USD 172.59 per a share. First of all, such a strong performance is contributed to an overall rise in the US stock market amid a recovery of both the American and global economies. Mild monetary policies of most central banks boost a rise in shares. In fact, the Dow Jones advanced by 14.96% year-to-date.

Secondly, a rise in the Apple stocks was boosted by a start of sales of iPhone Х. If our clients had bought CFDs on shares in Apple, investing only 10% of the total cost (the maximum leverage in trading CFDs on shares is 1:10), they would have increased their balance by 40.3% in October 2017 providing that their deposit was $1,000.

Importantly, the Apple stocks fall every year ahead of the presentation of the new iPhone, but after that they resume rally. However, in 2017 investors were greatly disappointed with the presentation of iPhone X, so the Apple stocks plunged from the daily high of USD 163.54 to USD 159.51 per a share. The appearance of the new model was postponed to November 3, which caused such a negative reaction. The media reported that the company delayed the start of production for a month due to technical disorders. To catch up with the schedule, the company had to hire new staff to the plant in China. 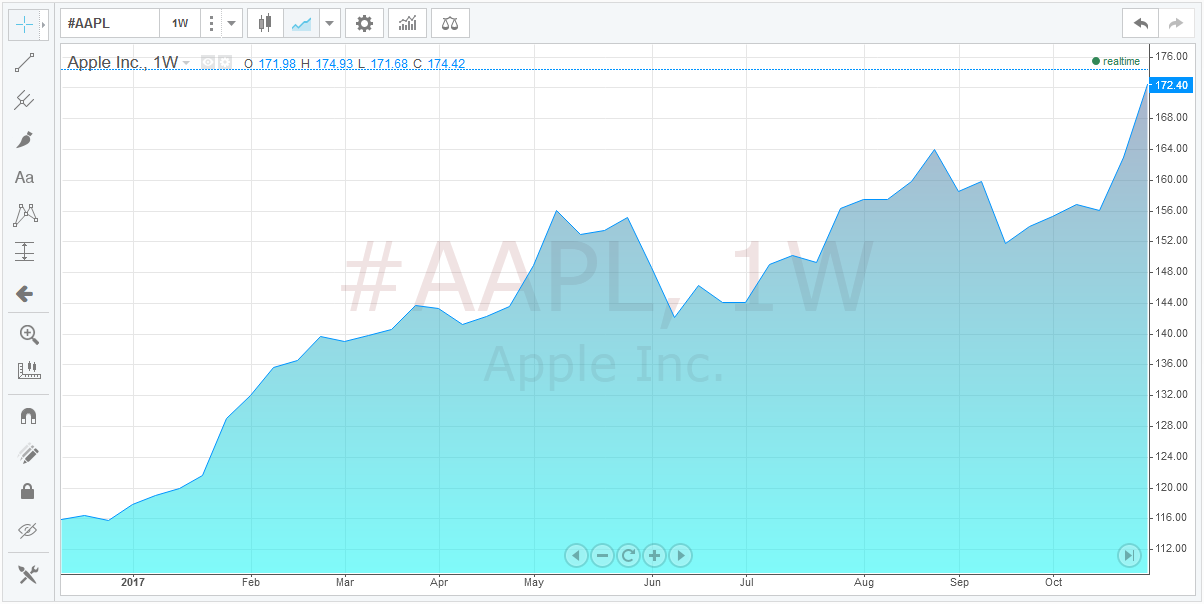 Trading CFDs on shares: where to start

CFDs on shares are not traded on the exchange market, they only reflect arrangements between buyers and sellers who trade on the over-the-counter market. Thus, traders work bypassing commissions and exchange rules, as CFDs make it easy to speculate on the rising or falling prices, regardless of directions of the underlying assets. A broker is an intermediate party in this process.

To trade contracts for difference successfully, a trader should choose a specialized broker whose main profile is CFD. One of the best companies in this area is InstaForex.

Important: Conditions for trading CFDs with InstaForex include low margin requirements and commissions, fixed spreads, as well as the opportunity to hold the position for an indefinitely long period.

Can't speak right now?
Ask your question in the chat.